Today I got the huge box 🙂

It is my almond and coconut four delivery. I decided to buy a lot, to have for a long time, especially having in mind that Christmas are not that far away actually. I mean, they will come and I don’t want to worry about what I am gonna do 🙂

Since going pale, I am cooking meat much more often than before and before I wasn’t doing that much with it. Like, for instance, I have never done anything with pork tenderloin, I did not even know how to butterfly it. I had some idea in my head, but I still checked on internet to make sure. So, changing way of eating makes me learn new things and I am really happy about that. So, there was a week of pork ribs, now came time to have some pork tenderloin (my menu of the week depends on what I can find at reasonable price or sales that would be organic and humane raised 🙂 )

The hardest part in this recipe was actually not the tenderloin but the sauce which includes making pecash butter. I do not have kitchen food processor, just blender so it took me a while and some modifications were required to be made to get the right consistence.

Basically, the recipe was calling for cups of nuts, but I did not have that much, so I simply chose to keep the proportions in minds, that goes 2:3 and thats it.  If you do have a food processor, then place nuts into its bowl and let it run for 8-10mins. until creamy and smooth texture. If you do not have, then its more work. I had to scape sides of my blender quite often and after around 10mins, I decided that it is going not exactly as I would like it to be, so I decided to simplify work by adding coconut oil to get the moisture out of the nuts and finally get this creamy and smooth texture. It work really feel and in couple minutes I had my beautiful pecash butter which is really tasty as well (Glad that I am over the phase of nut butters, so it will stay in fridge for much longer and I won’t have to make new butter soon 🙂 )

Preheat the oven to 350F. Butterfly the tenderloin lengthwise to have a uniform peace. Place apples, cinnamon, lemon zest, honey into food processor or blender and process until smooth but still chunky texture. Pour apple mixture onto flattened tenderloin and spread evenly. Roll up the pork and place into baking dish. Bake for 45-60mins (~25mins. per pound of pork). Remove from pan and let rest for 10 mins.

Mix pecash butter, crushed garlic, salt and pepper in bowl. Slowly add water to get desired consistence, something like thick soup. Serve Pork tenderloin with 1/2 sauce on top and rest on the side.

I took this recipe from Paleo Comfort Foods book and it was really nice. However, I was doubtful when I was making it that there is no seasoning on the top of the roll and just apples inside, so I was a bit worried that the taste might be quite bland. Actually it would have been, but that is where the almighty sauce comes in. It really makes all the difference, so if you plan to make this recipe, do not omit sauce. You can use any other combination of nuts, but sauce is a must, because it brings richness of taste.

This recipe is entirely taken from The Clothes Makes The Girl website, but I thought that it would be nice to share it with you, especially because livers are really nutritious, but at the same time not the food that is eaten every day. Anyhow, today I bought some chicken liver, because I saw them in meat section and I already made this recipe once. Keven really likes it and he is all about texture and really hesitant in trying new stuff, so I was pleasantly surprised that he loved them and actually ate almost all of the ones that I just made, before I could take a picture 🙂

1 to 1 1/2 pounds chicken livers
1/2 cup coconut flour (there still will be left quite a lot, but it need to be a lot for proper dusting.  I just reserve it and used it later with some savoury recipes that require coconut flour, such as Zucchini pancakes – nothing to be wasted)
1 teaspoon paprika
1 teaspoon  garlic powder
3/4 teaspoon cumin
3/4 teaspoon salt
1/4 teaspoon ground black pepper
1/4 teaspoon cloves (I did not have it, so used all spices mixed with Chinese 5 spices)
2-4 tablespoons coconut oil
garnish: fresh lemon and chopped parsley

Cut chicken livers into 2-inch pieces and pat dry with paper towels. Mix flour and all the spices in a big bowl. Add the livers and mix with flour making sure that the livers are all covered. Meanwhile heat 2 tbsp of coconut oil over medium high heat, let it heat for couple minutes and add livers. I needed two batches to cook them all as they need to have space and not touch each other. Be prepared for lots of some, as high heated oil and flour tends to have such a powerful smokey combination and don’t be too close to the pan. Fry for 2-3 mins. until bottom is browned and crispy.  Flip livers with tongs and brown other side. Put the done ones on paper towel to drain while you make the rest. Serve alone or with squeezed lemon juice.

Some time ago I found this recipe for broccoli fritters that used broccoli stems as a base and I have been planning to make it for weeks now, so I was saving all the stems of broccoli for those fritters. The original recipe belongs to Juli from PaleOMG, though I modified it a bit. These fritters are so good that I could not stop eating them…I have to say that only with third batch in pan I finally understood what size they should be so that they would not break into parts, so don’t get frustrated while trying, their taste one way or another is still amazing. Seriously…amazing…

Mix all ingredients together. It should hold together. Place in heated pan with some fat with a help of spoon. I discovered that best size is spoon size as it makes it much easier to flip it. fry for 3-4 mins. before flipping (it should be browned). Cook about the same time on the other side.

It makes quite a lot of them, but it is amazing dish for breakfast and to have as a snack. I had to stop myself eating them and Keven was laughing at me, saying that I am making such a big sin by eating broccoli :))))

As I have my new Paleo Comfort Food cookbook, I decided to make a recipe for minced pork to go together with broccoli pancakes. It is called breakfast sausages: 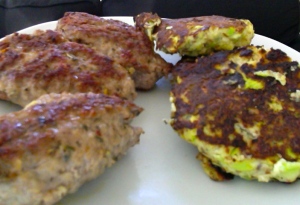 Mix all ingredients in bowl. From 2 inch-wide patties. Heat skillet over medium heat , cook until browned or cooked through both sides.

yesterday I received my books from Amazon and already started digging into them…As my newest passions are nutrition and dog, so naturally books are about that. So, I got 4 books:

Gary Taubes “Good calories, Bad calories”. I read lots of good reviews about this book and decided that it is definitely worth to have at home and read it thoroughly, because I definitely can confirm that low fat diet is not working and actually high fat diet is much better option. But still I want to have as clear as possible picture of how my body works and what it is best for it. (even though I have to admit that Paleo diet and reading about it and taking Whole30 challenge helped a lot to get a picture). At the same time, I remember that lets say 5 years ago, for me it was too much even to understand what it is proteins, carbs and fats, I simply was saying that I have no idea what all these numbers in labels mean and I actually had no idea, so I am very proud that I evolved so much in my understanding about nutrition and what is what.

Julie and Charles Mayfield “Paleo Comfort foods”. Again, after going through many reviews, I decided that this would be book to have and it looks really promising. I am gonna try to make tomorrow some meatballs, though I will have to omit some ingredients as my Whole30 challenge is not over, so no sauce with red wine for me, even if it is only 2 tbsp. I have less than a week left for the challenge 🙂 The other book that I definitely want to have is by Melissa Joulwan “Well Fed”, as I love  her website and tried many recipes and she seems to be really good cook.

It took us a long time to choose the dog food that would satisfy our requirements and would be as healthy as possible. After reading a lot of labels and ingredient lists, checking online and etc. we decided to feed Nora with Orijen brand dog food. It is canadian and it seems to use whole food rather than protein by-products and is not full of preservatives. However,  I know that best would be to make food for dog ourselves and I don’t mind doing that, so I wanted to have book about dog nutrition. It is not as complete as I would like it to be and I would like to have more recipes in there simply because they make differentiation by dog weight and then provide recipes, but same recipes go for 15 lbs dog and 45 lbs dog just it calls for different quantities of ingredients which I would have adjusted by myself, so for me it is basically waste of paper. Instead I would have suggested

simply to provide recipe for 10 lbs of dog weight and multiply according to actual weight. Apart from that book contains really useful information on dog nutrition, on supplements and vitamins and nutrient requirements according to adult dog weight. Anyhow, I still can’t use the recipes in there yet as Nora is a puppy and puppies need a lot of different elements to grow healthy and strong, so for a while I will stick with pre-made dog food. Still, I made for her today Carrot and Cinnamon Puppy Treats as to introduce different tread for training sessions.

Gerilyn J. Bielakiewicz “The Everything Dog Training and Tricks book”

Even though I have read fairly good amount of books about dog psychology and training, I still wanted to have one book that would be mine and not borrowed from the library and that would include a bit more of tricks for dogs and reviews seemed to favour this book. Time will show, I haven’t read it yet actually.